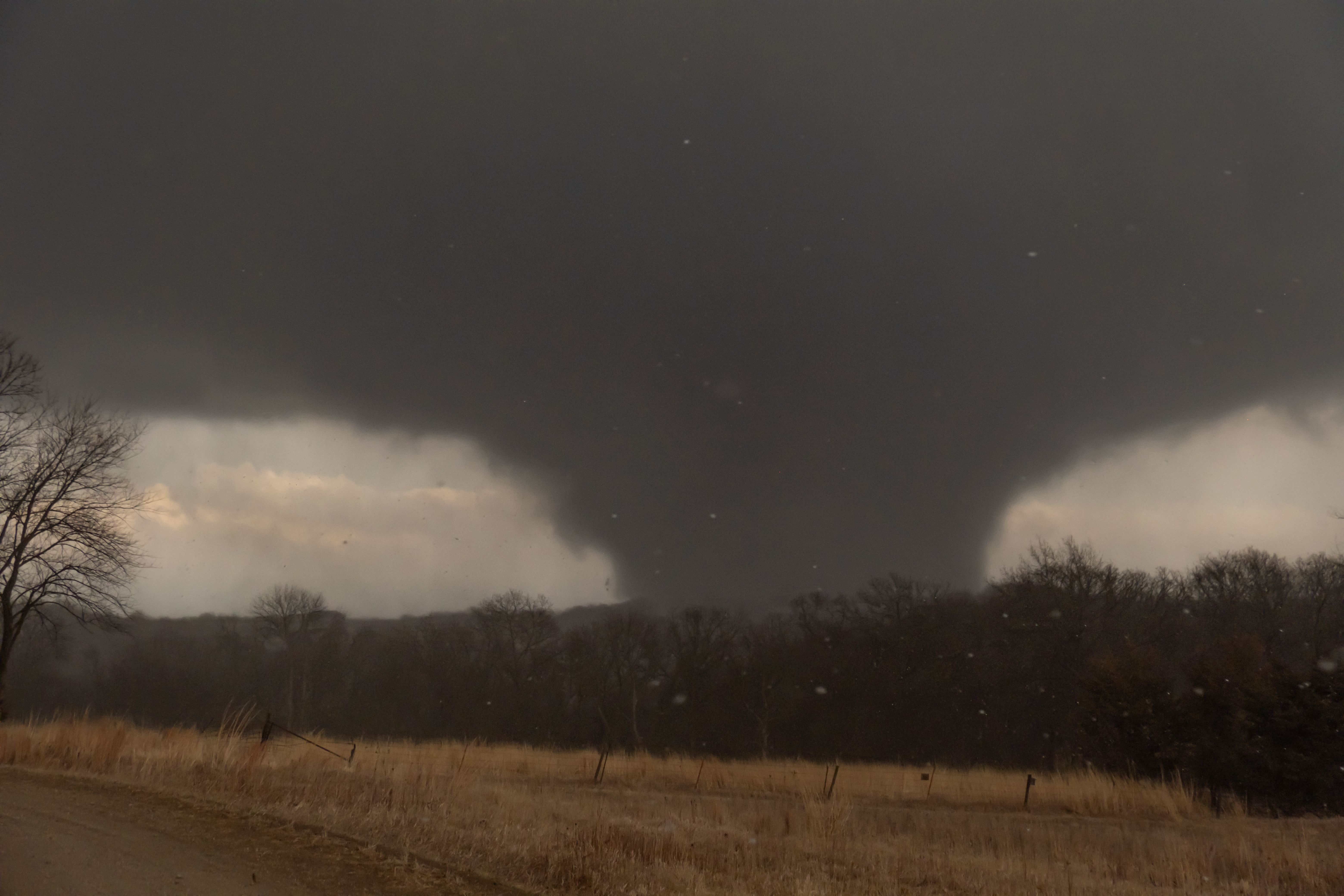 Just a couple weeks are officially left in the winter season. On March 20, we’ll officially begin spring. It’s the time of the year when great clashes of air masses occur over the United States resulting in severe weather and sometimes tornadoes. On March 5, this severe weather threat would come early for the Midwest as Iowa found itself in the crosshairs of potentially potent severe weather.

March 5 was initially forecast by the Storm Prediction Center on the lower-end of the severe weather and tornado threat. They had issued a Slight Risk and 5% chance for a tornado. On a scale of 1 to 5, this would be a threat level of 2. Here’s what the SPC had on the morning of March 5:

Cities that were in the path of this threat included Omaha, NE, Des Moines, IA, La Crosse, WI and unfortunately also the town of Winterset, IA where an EF4 wedge tornado would tear through the area with max winds up to 170 mph, killing 6 people. 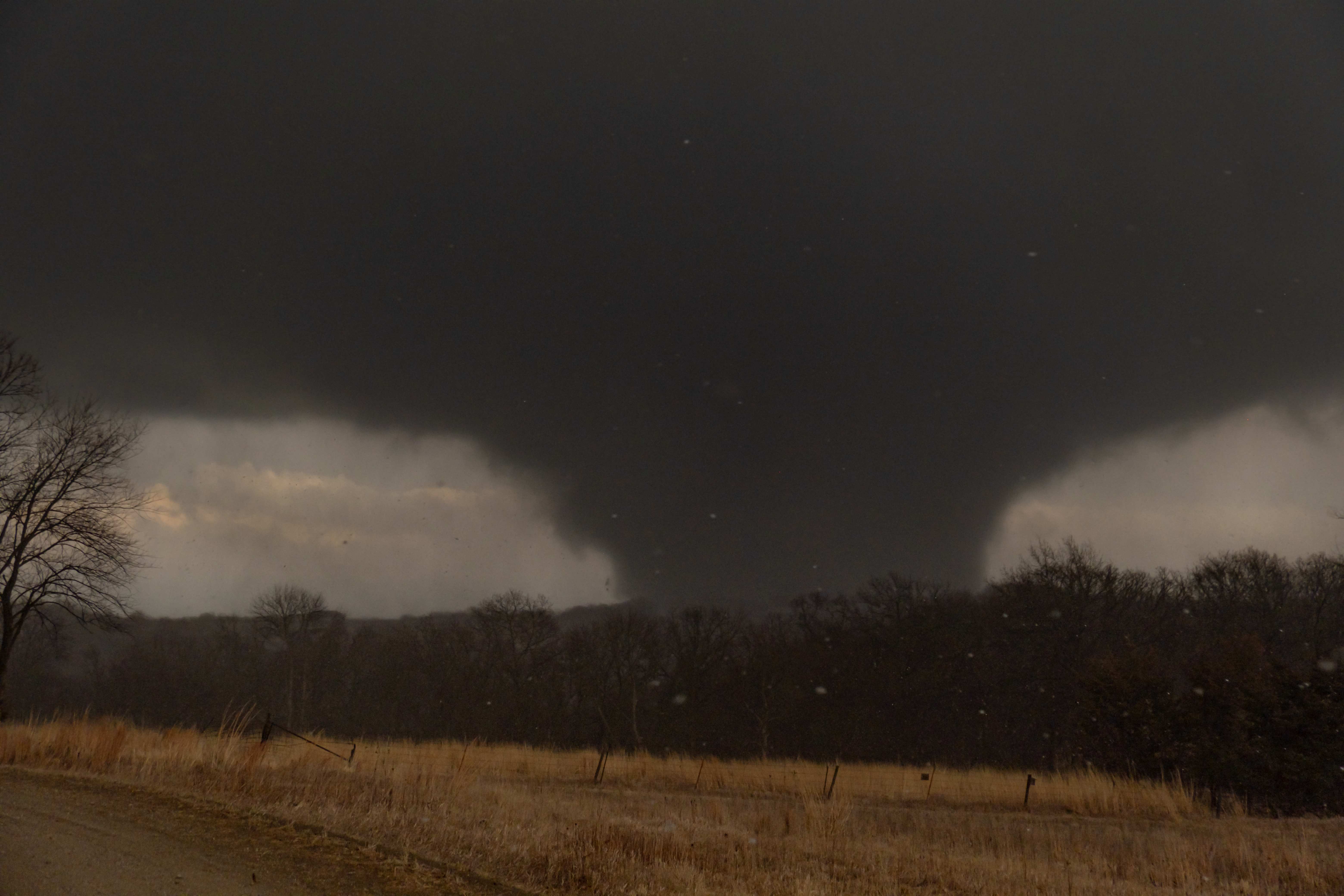 EF4 wedge tornadoes begins to cause damage to a structure near Winterset, IA on 3-5-22

On the morning of March 5, I woke up in the city of Sioux Falls, SD, just a couple hours north of where the day's event would unfold. Having left from Manitoba, Canada the previous night, I would wake up in Sioux Falls on the morning of 3-5-22 with plenty of time to get to my “general” target area of the Omaha area. The key to this day for tracking down where the storms would unfold is where a “triple point” (the intersection of boundaries of different air masses) would form.

Using the MyRadar app with “fronts” turned on, I was able to identify that the center of the low pressure area for the storm system, the driving force behind the severe weather event for that day, was located over north-central Kansas. 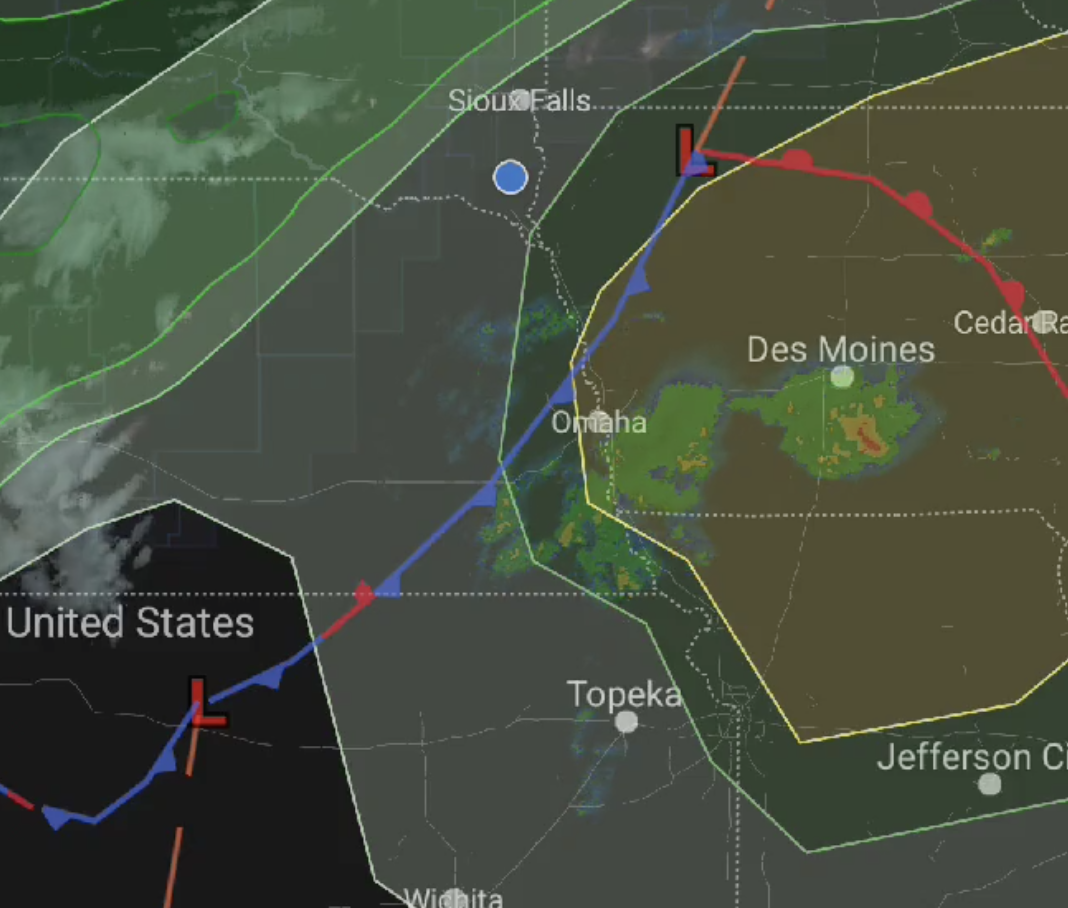 Things appeared to be on track for severe weather to happen in or near Omaha, so I continued that morning to make my way south, continuing to monitor surface observations. During the 2 hour drive down to Omaha, I decided that I would need to set up east of Omaha that day. I did not want to have to drive through Omaha while chasing storms, which could potentially be moving at quite fast speeds. The key to this day would be to stay out ahead of the storms and let them come to me at first. I decided to take Interstate I-80 east of Omaha near the town of Avoca, IA. While en-route to Omaha, the SPC upgraded the risk to Enhanced, but kept the 5% tornado risk. The Enhanced area of severe weather would be upgraded for a strong wind threat.

One of the limiting factors for storms on this day and whether or not they would produce tornadoes, was if clouds would clear out in the area where the triple point would form in time. Some morning showers had moved through the area and this meant cloudy conditions.

Once arriving in Avoca, I could see that the clearing was happening. The sun was shining and the surface was quickly warming. This was not a good thing for the residents of Iowa between Omaha and Des Moines.

I decided that I needed to move a little south shortly after arriving in Avoca. It appeared the surface low was a bit further south from forecasted positions in some of the modeling. I headed for Emerson, IA. 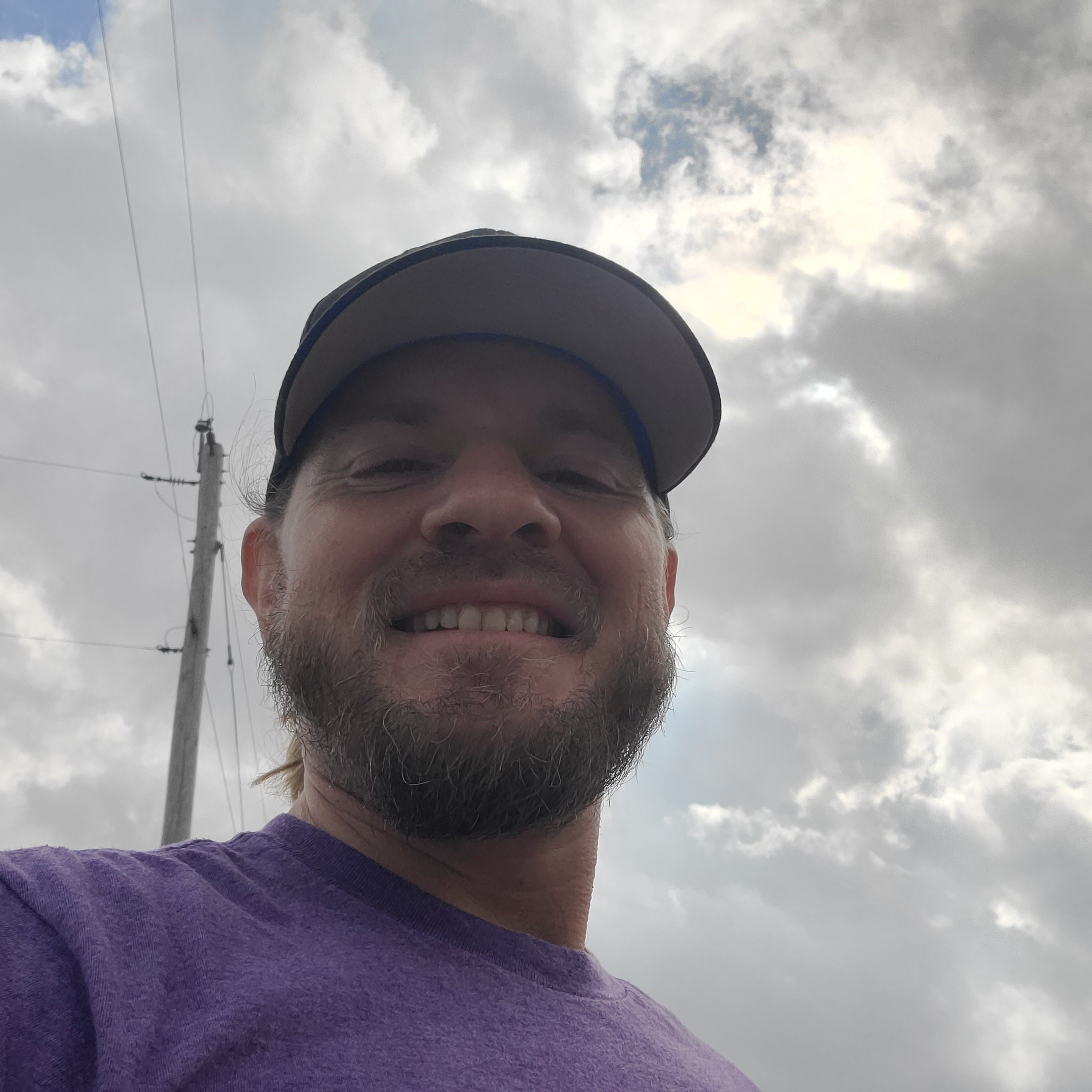 En-route to Emerson, the SPC (Storm Prediction Center) was also seeing the threat increasing for Iowa. They upgraded the risk to an Enhanced Risk with 10% tornado risk.

Emerson, IA would be the perfect position to start tracking the threat. It was in the heart of the 10% tornado risk, had good road options in all directions, and looked like it would be near to where the center of the low pressure and triple point would come through. At approximately 2:00 PM CST a Tornado Watch was issued by the SPC. 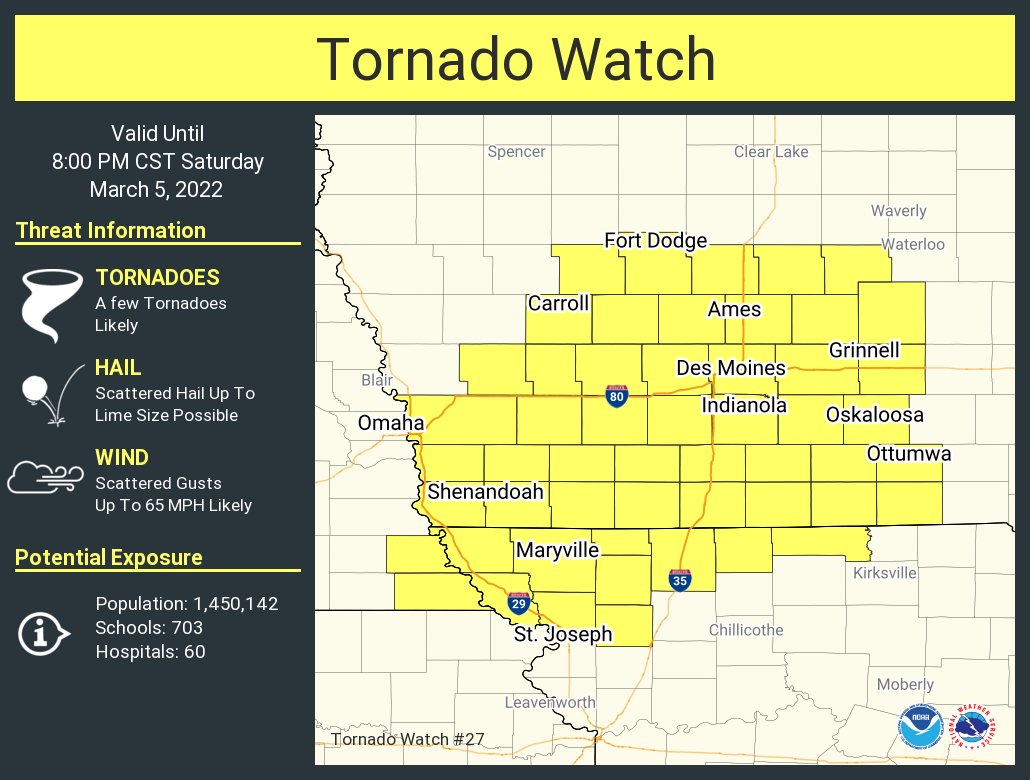 Shortly after the Tornado Watch was issued I would begin to see storms develop to the SW of Emerson, IA. There were periodic rumbles of thunder, strong warm winds at the surface, and shining sun out ahead of the storms. Hours earlier I had been in winter temperatures, and now, just inside the warm sector where the battleground of seasons would soon begin, I found myself perfectly positioned, enjoying the relatively calm before the storm. 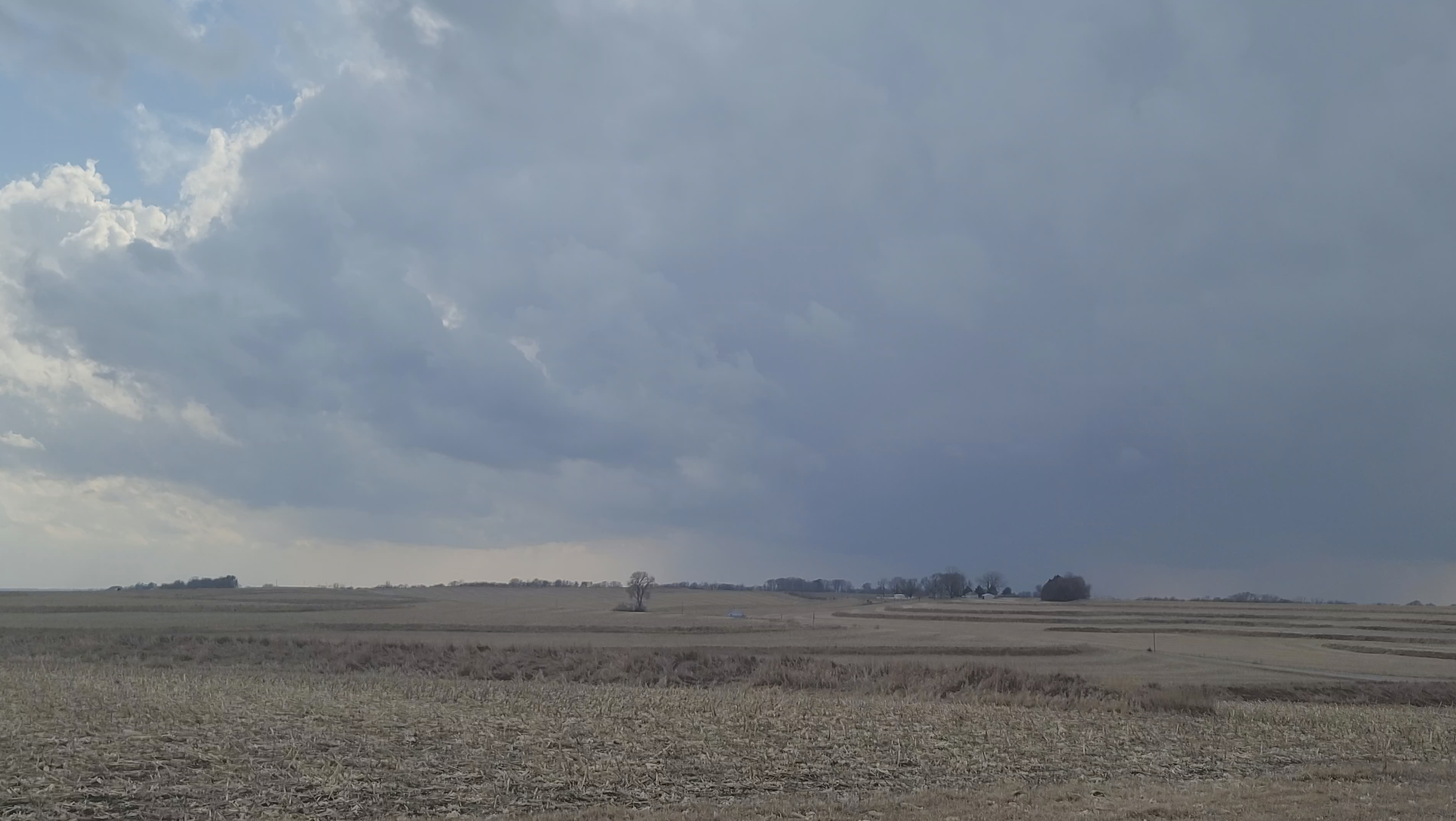 More storms were now starting to fire to the southwest of my position in Emerson. I sat and watched a storm directly to my west for about 10 minutes, until it began to fall apart and I moved south to position myself for the storm pictured above.

One of the things that was observed in the forecast modeling was that an arc of supercells would fire ahead of the low pressure system, in the warm sector of the triple point. And this is exactly what was now beginning to happen.

As I was tracking the storms near Emerson, I could see on radar that more supercells were beginning to develop to my south. My plan was to at first track these northern storms for tornadoes, and then move east to intercept the southern storms as they moved to the northeast toward Des Moines.

As the center of the low pressure system ripped through Emerson, a supercell produced multiple weak and brief tornadoes as a large mesocyclone rotated around. 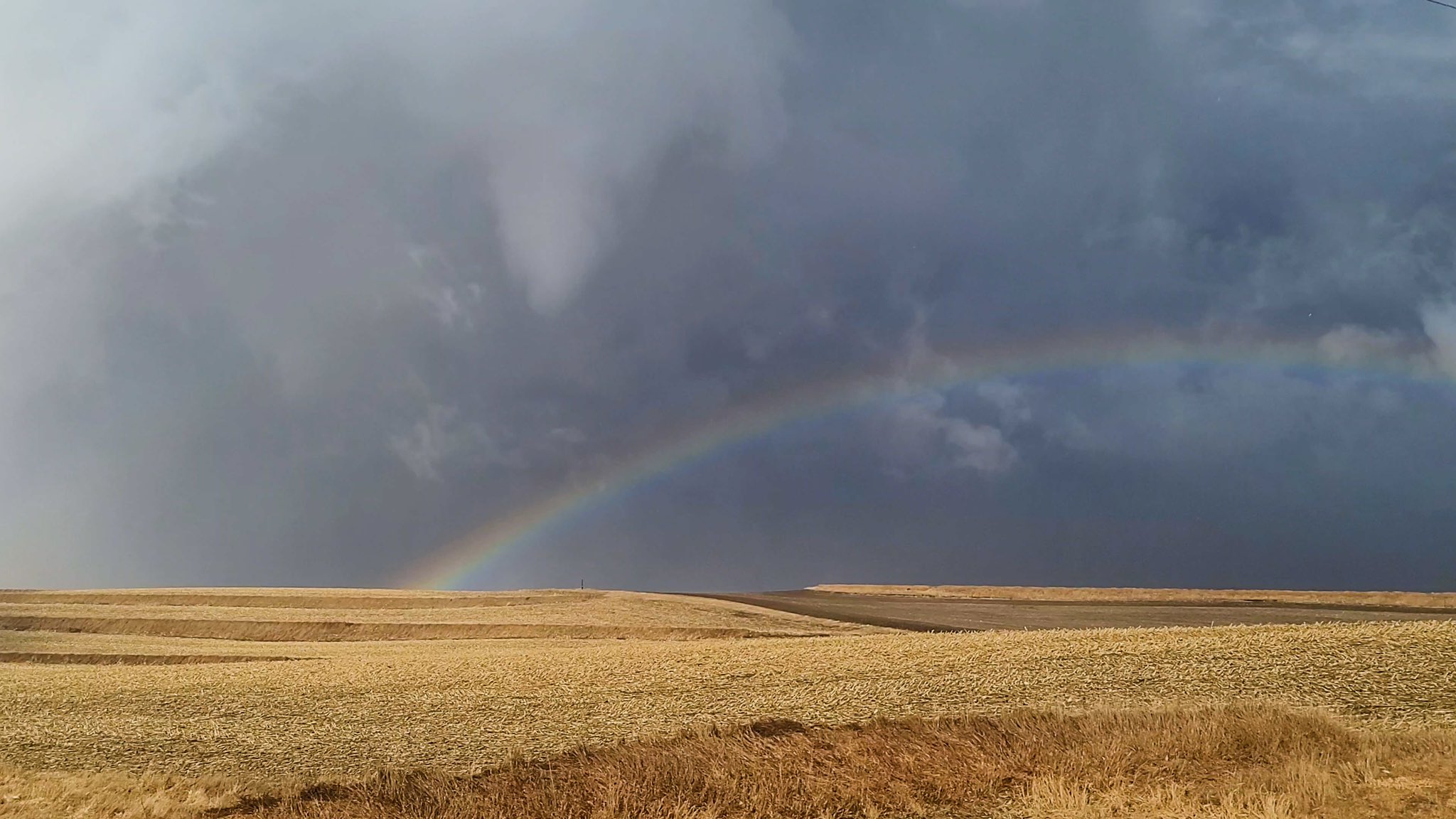 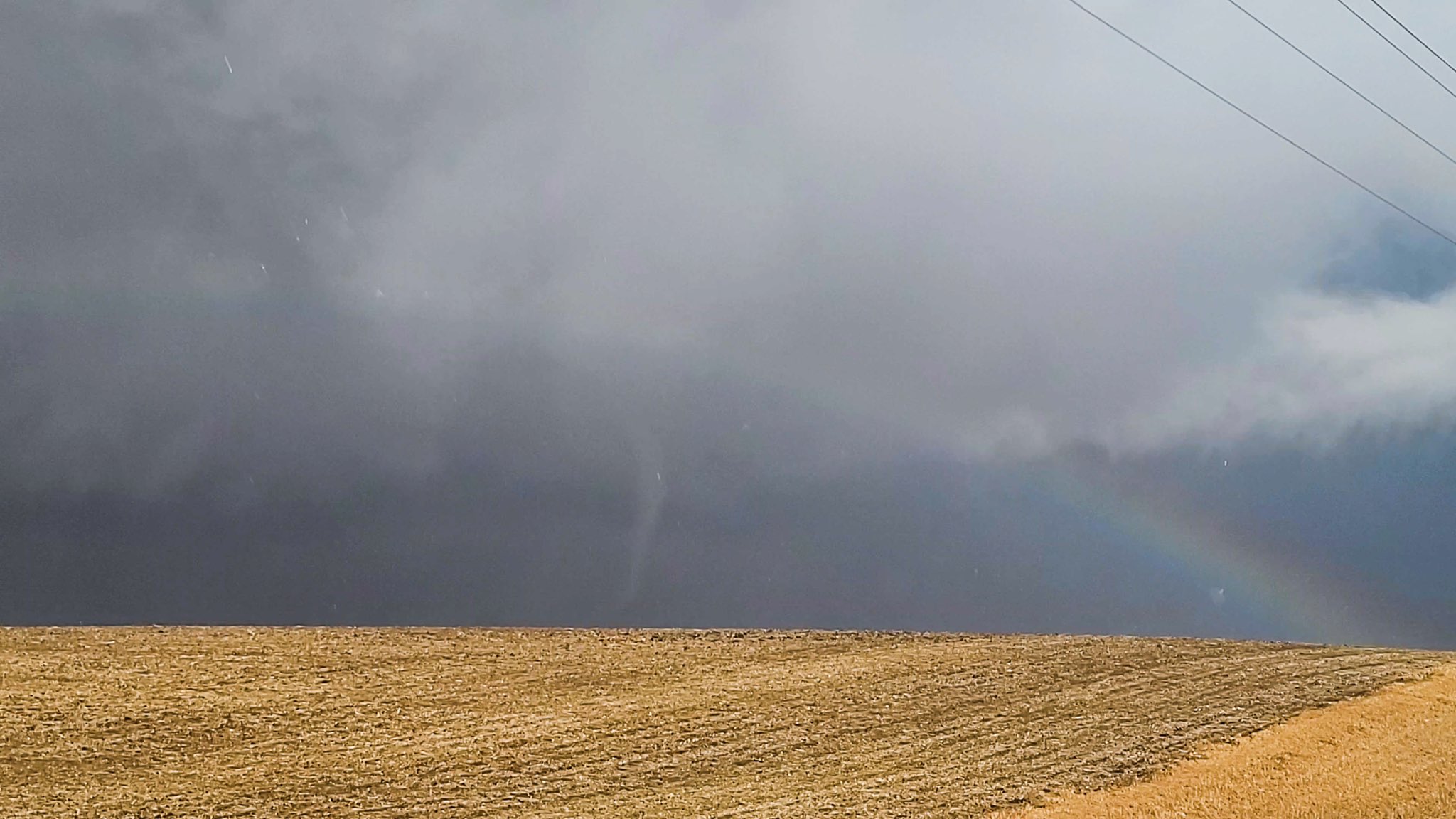 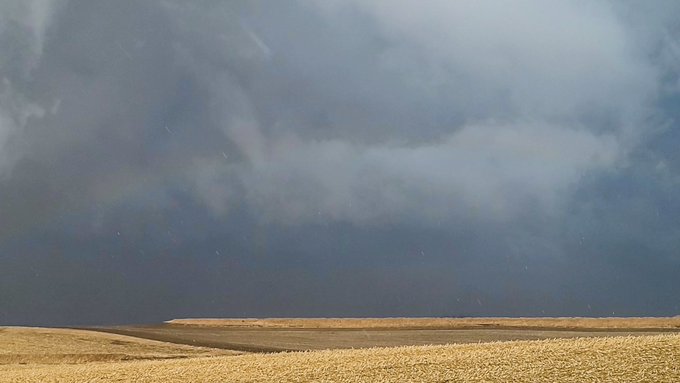 Multiple funnels and a few brief weak tornadoes touch down south of Emerson, IA on 3-5-2022

After warning the National Weather Service and the public via Twitter, I continued my chase to the east to get into position for what looked like the dominant storm of the day.

I did not observe a tornado so I continued tracking the storm east, watching closely for the signs of imminent tornado production.

Just a few miles west of the town of Winterset, Iowa, and traveling on highway 92, I began to see the signs of a possible tornado touching down at any second. I saw a rapidly spinning funnel that was probably already causing damage to trees on the ground, however I could not see any ground contact.  I immediately took a road to my south to get closer.

After about 1 mile of driving on this road, the road required me to turn back to the east (left), but I was right next to the ominous looking base of the storm.

The base of the storm began to take on a conical shape, and within seconds, a tornado was now spinning on the ground beneath the base. 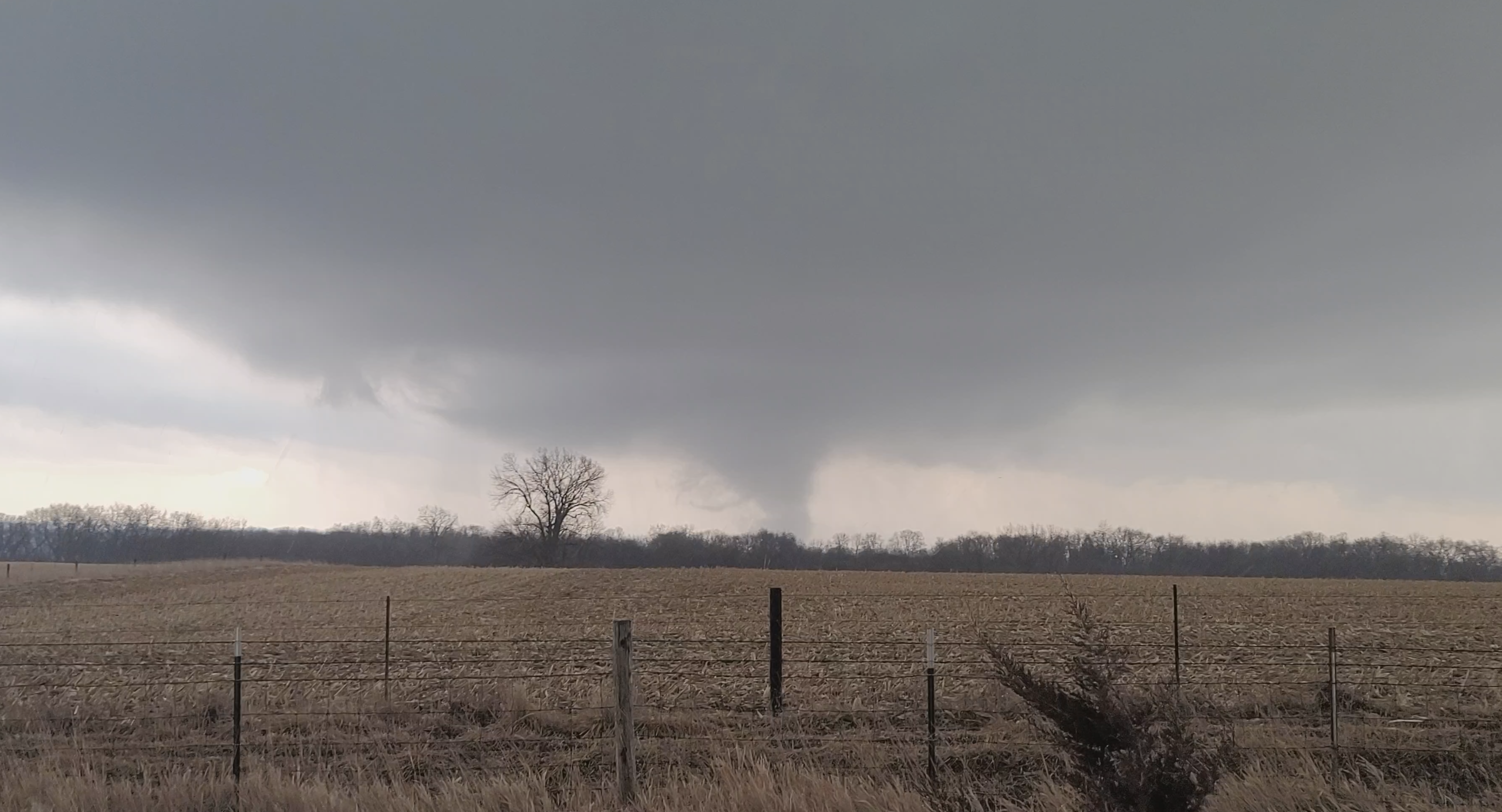 Eventually this tornado took on the shape and size of a “wedge” tornado, or a tornado that is wider than it is tall, as it made its way toward the town of Winterset, IA.

I would alert the National Weather Service in Des Moines that a large wedge tornado had formed SW of Des Moines at 4:38 PM CST. Tracking the tornado to the east on a dirt road, eventually my road turned due north. The tornado disappeared into the rain as it moved to the northeast, right toward Winterset.

This would be the last of the tornado that I would see. After going through Winterset, I would come across the first damage that I had seen. A farm and business was badly damaged, with hissing gas propane tanks. On the highway that the farm was on, was a black SUV that looked like it had been splattered with white paint.

Except, it wasn’t white paint, it was all the spots where wind thrown debris had chipped the black paint off of the SUV.

The woman driving the vehicle had already been taken to the hospital by the time I arrived at that location. 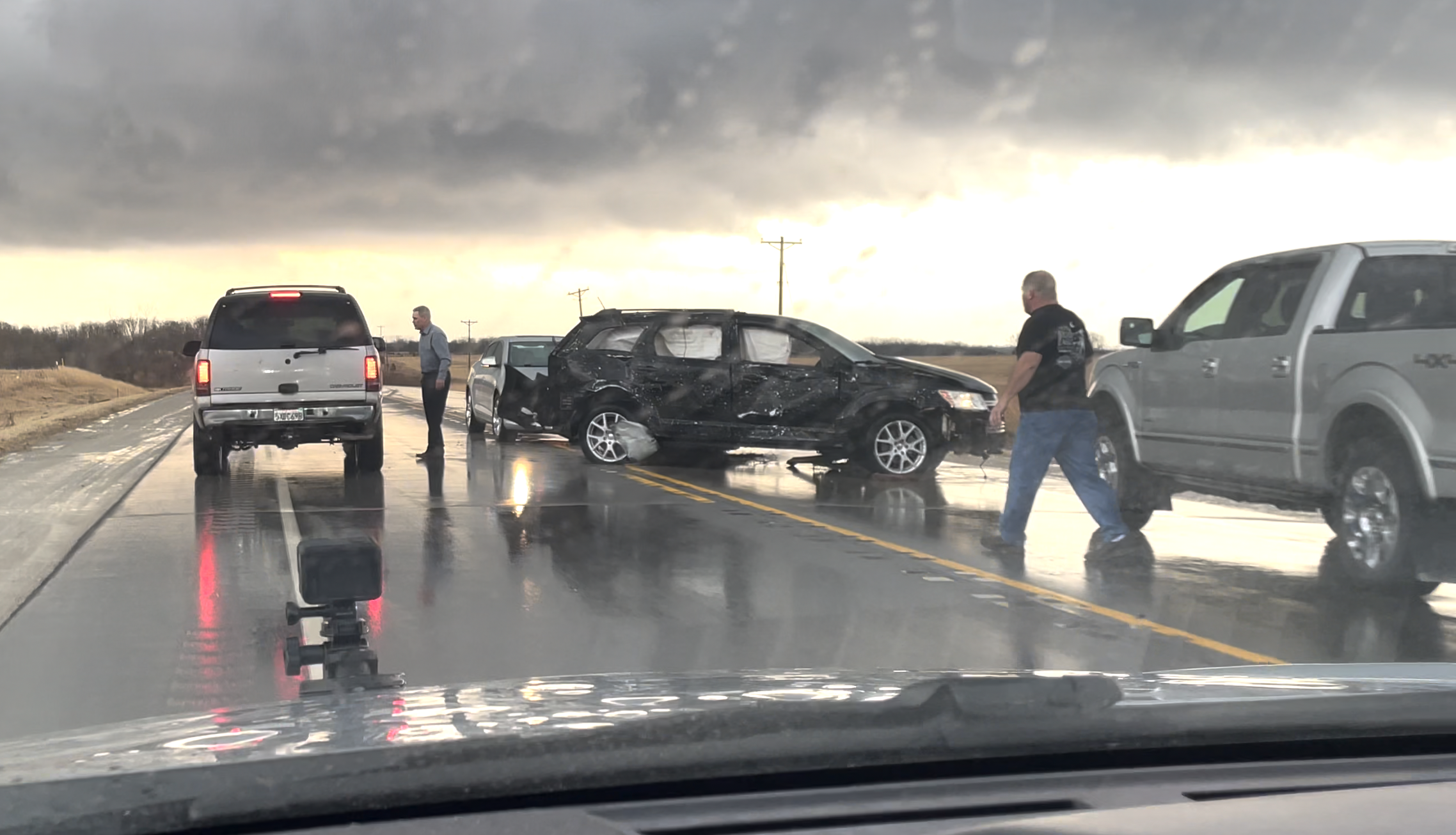 A damaged and disabled black SUV sits on highway 92 east of Winterset, IA after being hit by a tornado 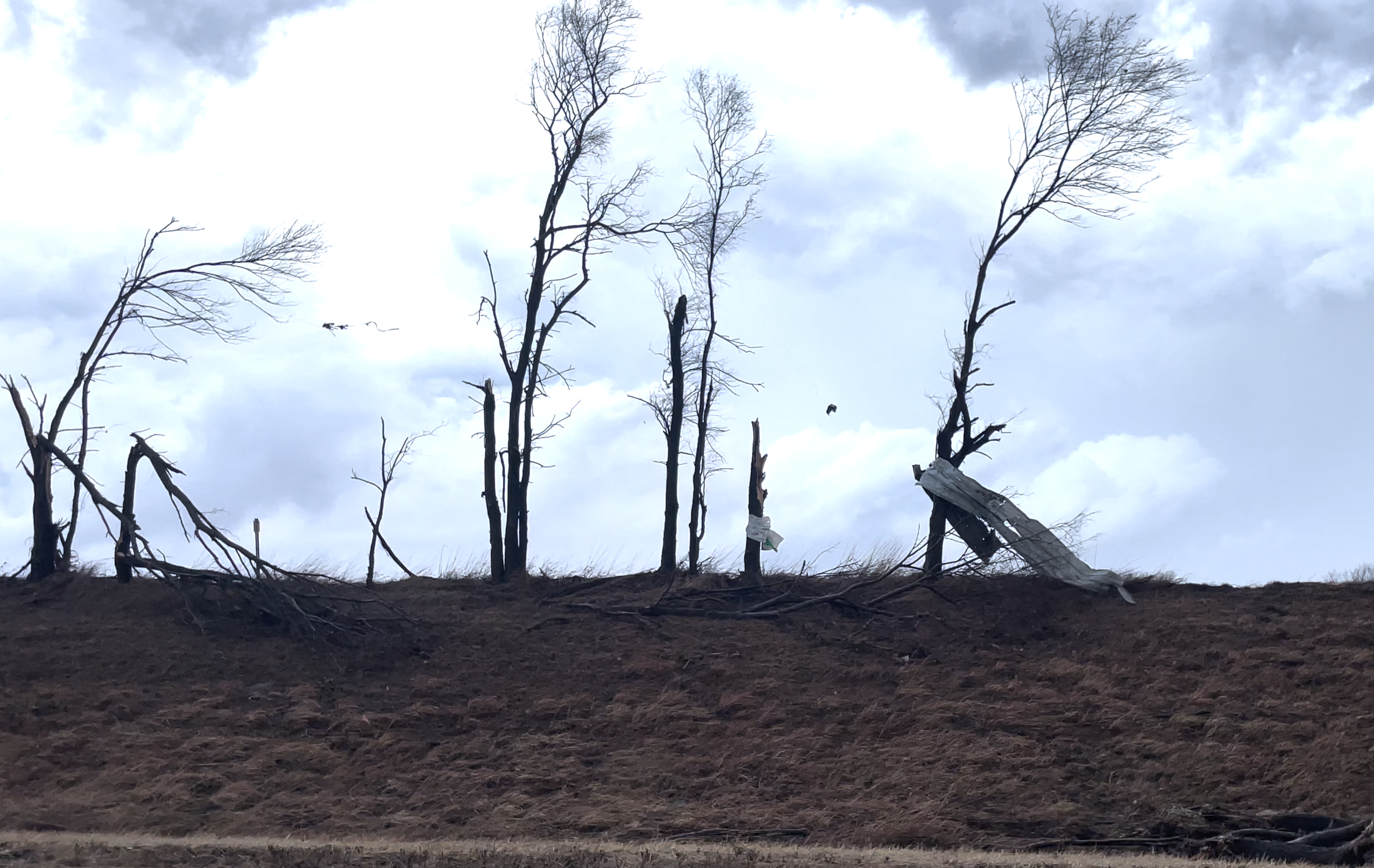 Tree’s are snapped in half with sheet metal debris wrapped around them after an EF4 tornado east of Winterset, IA impacts them

My attempts to catch back up with the tornado at legal speed limits failed, and eventually I would break off from the storm to head south to some new storms that were developing. Thankfully these storms did not produce tornadoes.

The Winterset, Iowa tornado was an EF-4 tornado with maximum winds of 170 mph, a maximum width of 800 yards, and it traveled for 69.5 miles and caused 6 deaths. 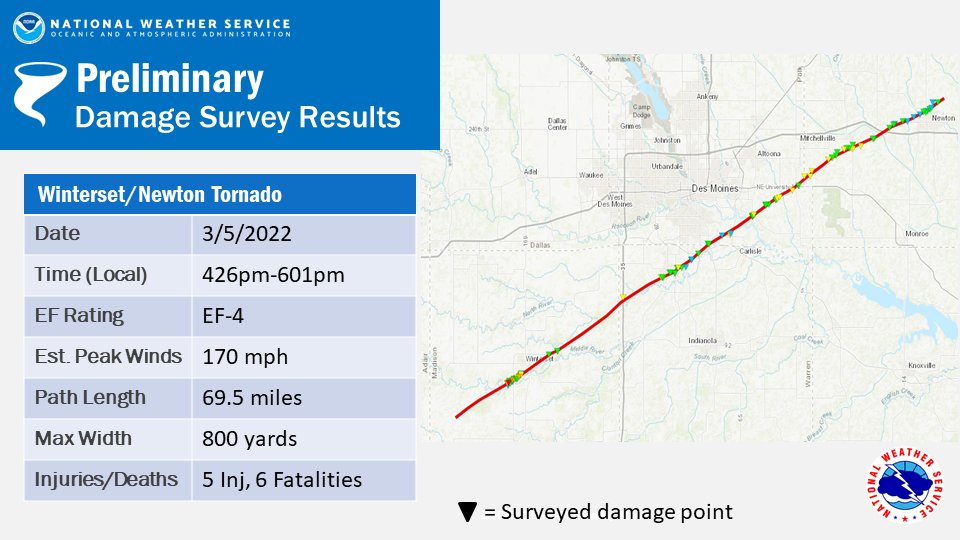