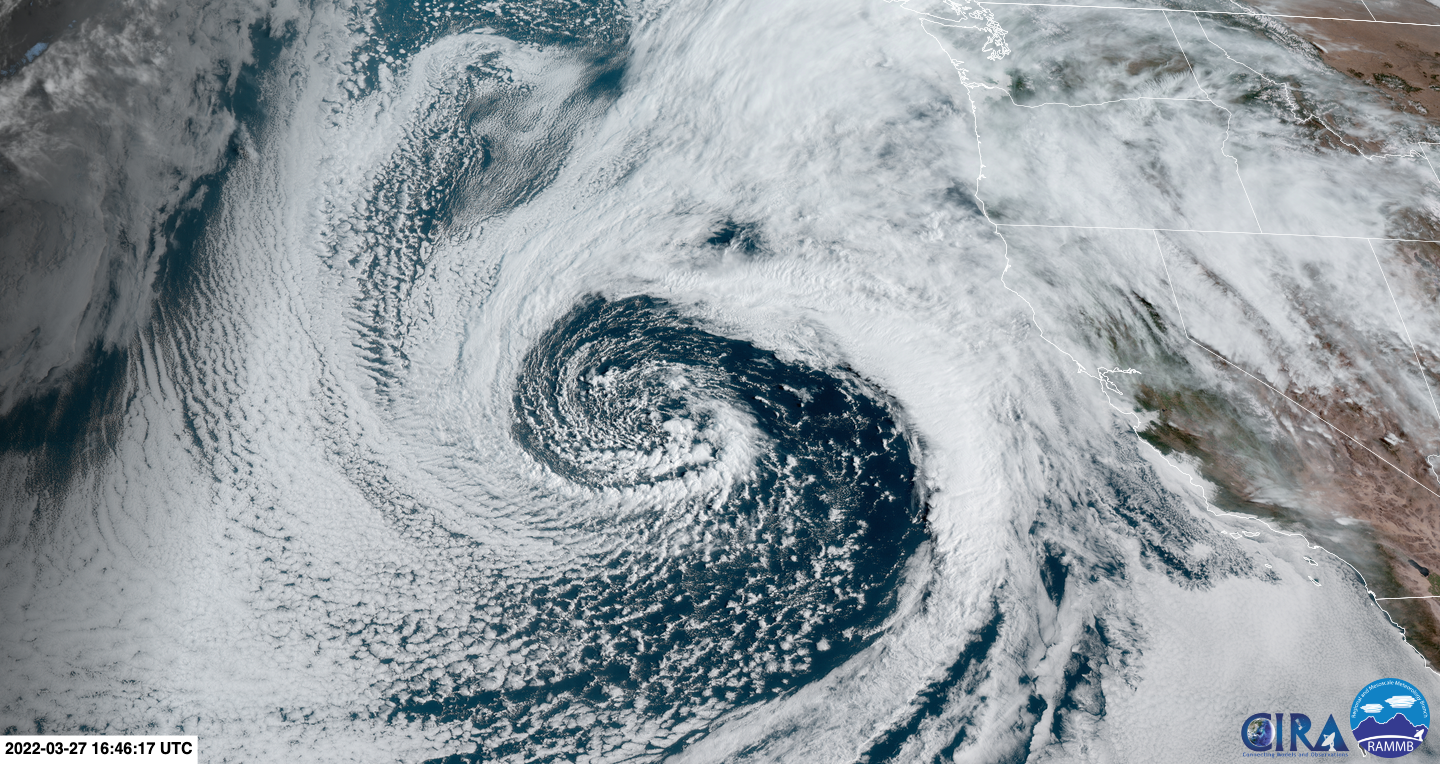 Californians can finally breathe a brief sigh of relief. A significant storm is finally forecast to hit California for the first time since December after the state has experienced a record dry start to 2022.

The incredibly photogenic storm is situated just off the California coast this week and has already begun to tap into tropical moisture extending all the way back to Hawaii. A combination of a strong Pacific jet stream, robust low-pressure system, and deep moisture will provide all the ingredients necessary for widespread precipitation across much of California.

The storm and its first associated wave of precipitation will begin to move onshore early this week in Central and Northern California before moving into SoCal. High-resolution models are suggesting the potential for a NCFR or narrow cold frontal rainband to develop and slam into the Central Coast. This could spell major troubles for recent burn scars such as the Dolan Fire and Colorado Fire where heavy rain rates could cause flash flooding and debris flows. NCFRs have had a history of causing major flooding on burn scars in California, most recently with the Thomas Fire burn scar in 2018 where 23 people were killed by debris flows in the Montecito area. Definitely, something to keep an eye on.

The HRRR model future radar forecast over the next 48 hours of the upcoming storm for California. Image Credit: WeatherBell Maps

A second wave of precipitation is then expected to move onshore during the daytime across the Central Coast and SoCal bringing another shot of moderate to heavy precipitation. Thunderstorm/convective chances will be much higher with this second wave of precipitation than the first with steepening lapse rates (rate of temperature change with height) and increasing CAPE (convective available potential energy). Additionally, this wave will be moving in during daylight hours and with the higher March sun angle, the atmosphere will have a little extra "oomph" to it.

NorCal is expected to mostly miss out on this wave with the brunt of moisture expected to stay south of the SF Bay Area. By this point, rainfall totals will really begin to start adding up across Central and Southern California, especially on southwestern/southern facing slopes. The latest high-resolution model runs suggest rainfall totals may approach 6 inches in the Transverse Range  above Santa Barbara as that orographic lift squeezes out every drop of moisture from the atmosphere. 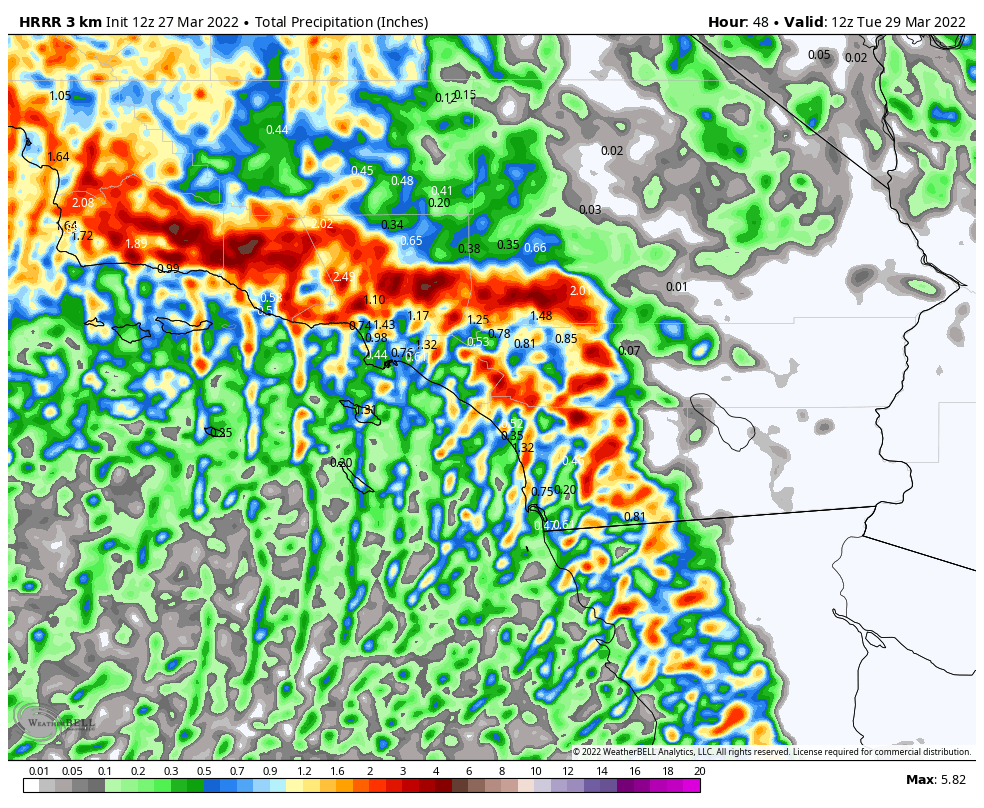 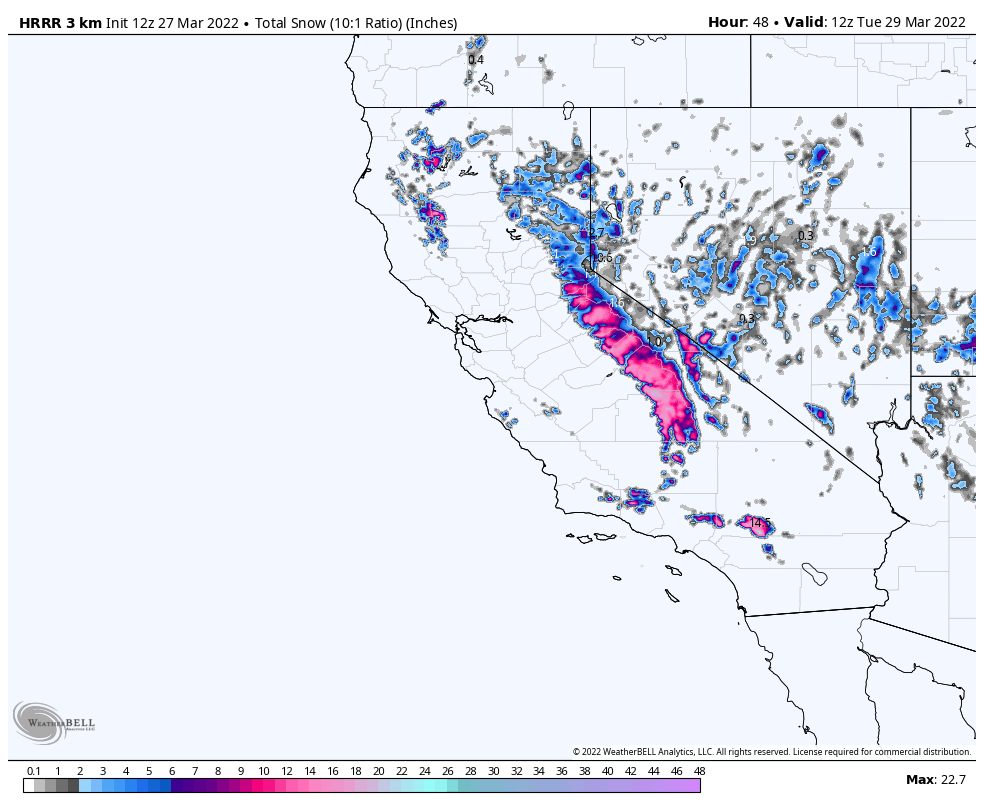 Forecasted snowfall totals from the HRRR model over the next 2 days for California. Image Credit: WeatherBell Maps

Rainfall totals from this storm will be highest across SoCal where widespread rainfall totals from 0.75-2.00 inches are expected across the San Diego and Los Angeles metro areas. Along the Central Coast, 1-2.5 inch totals will be common along the coast with higher amounts in higher terrain and lower amounts across inland valleys. Much of the Bay Area and Central Valley will mostly miss out on the second wave of precipitation, so generally less rainfall is expected, generally in the 0.25-1.00 inch zone. Where the strongest convective bands and isolated thunderstorms develop across the state on Monday will greatly affect local precipitation totals and could really provide a boom or bust situation for many locales. By early Tuesday morning, the storm will be exiting the state. 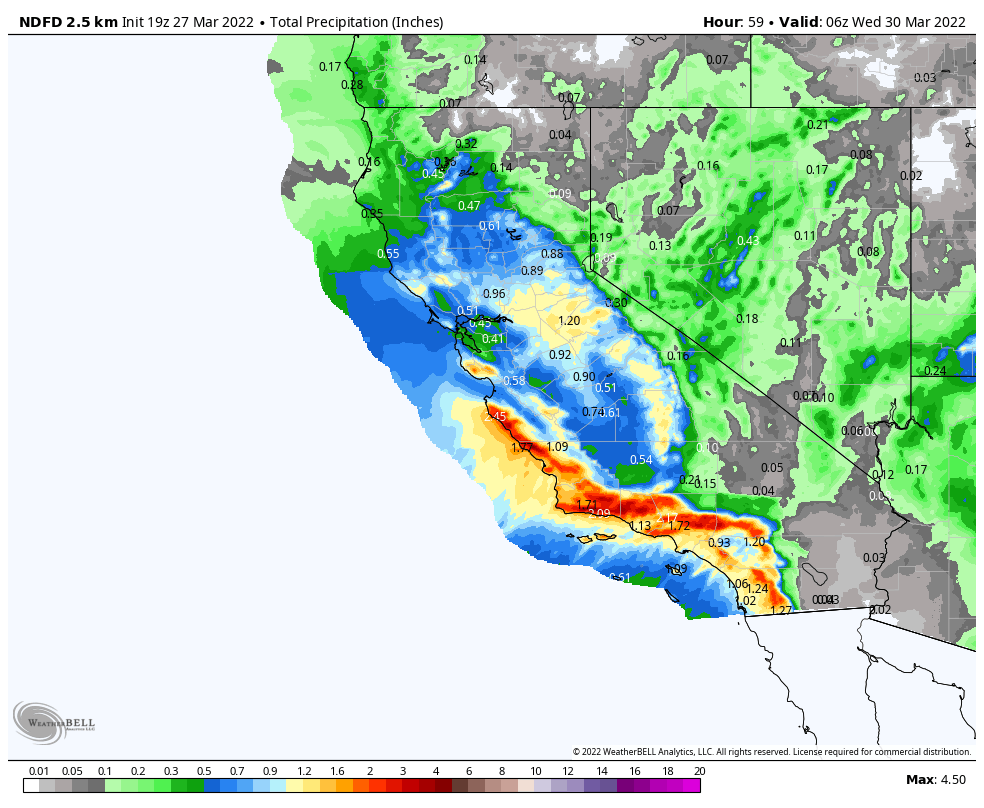 This one-and-done storm system will provide a brief reprieve from the unrelenting dry conditions across the state that have persisted since January but will likely not provide much long-term drought relief. The greatest benefits from this system will be a slight delay in fire season and a brief halting of the rapidly drying vegetation and declining snowpack across much of the state. Nonetheless, Californians will take all the precipitation they can get!