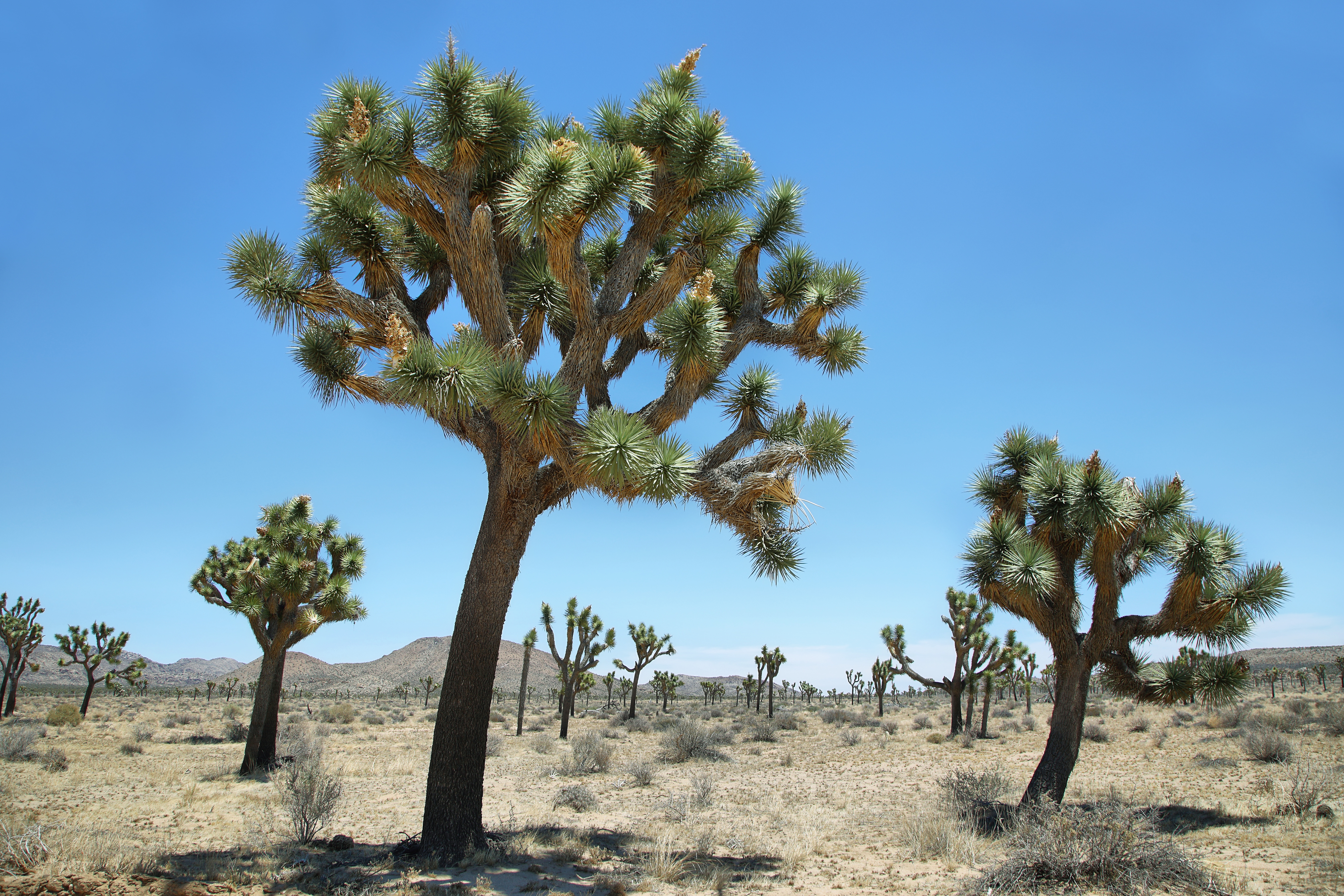 An intensifying heat dome over the Southwest is about to bring the region its hottest string of days so far in 2022.

Daily record highs from the Bay Area to Phoenix will be smashed as the intense dome of high pressure slowly shifts east over the weekend.

Forecasted highs over the next 4 days from the National Weather Service. Credit: WeatherBell Maps

Across the Southwest, over 30 million people are under Excessive Heat Warnings or heat advisories, with temperatures expected to soar dangerously high increasing the risk of heat illnesses. 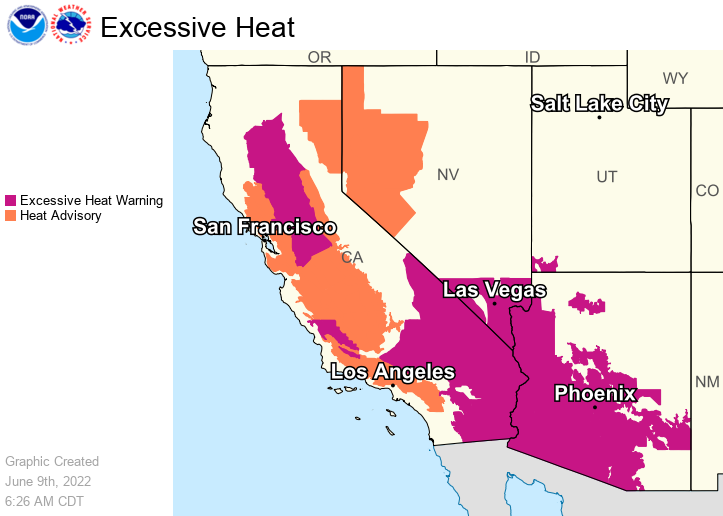 In California, the heatwave is expected to peak Friday, with the worst heat expected inland as California's infamous marine layer spares San Francisco, Oakland, and Los Angeles from the worst of the heat. Further inland cities like San Jose, Sacramento, and Fresno will not be as lucky, away from the cooling effect of the marine layer.

Temperatures will soar as high as 107° in the Sacramento Valley on Friday and in the low 100s near Fresno. Inland locations in the Bay Area and LA regions will peak in the mid-90s to low 100s.

In the Mojave Desert temperatures will skyrocket into the 110s and even 120s in the hottest locations. Death Valley, one of the hottest places in the world will soar as high as 123° on Friday and Saturday, which will be the first 120° temperature reading in the US this year. 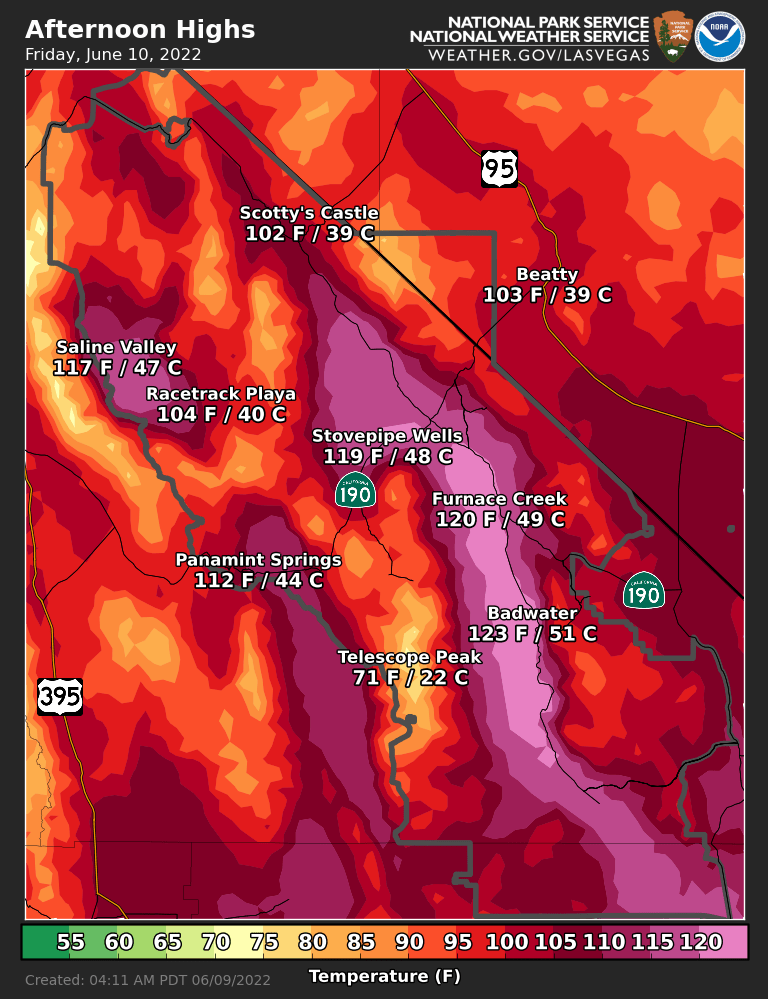 Temperatures will slightly decrease statewide Saturday before dropping even further on Sunday as low pressure moves through the northern part of the state.

Nevada will see blistering hot temperatures as well with a Heat Advisory in effect for Reno and an Excessive Heat Warning in effect for Vegas. Reno will see its hottest temperatures on Friday peaking in the upper 90s while Las Vegas will see back-to-back days near 110° on Friday and Saturday. Daily record highs are likely to be broken with a heightened risk for heat exhaustion and heat stroke. 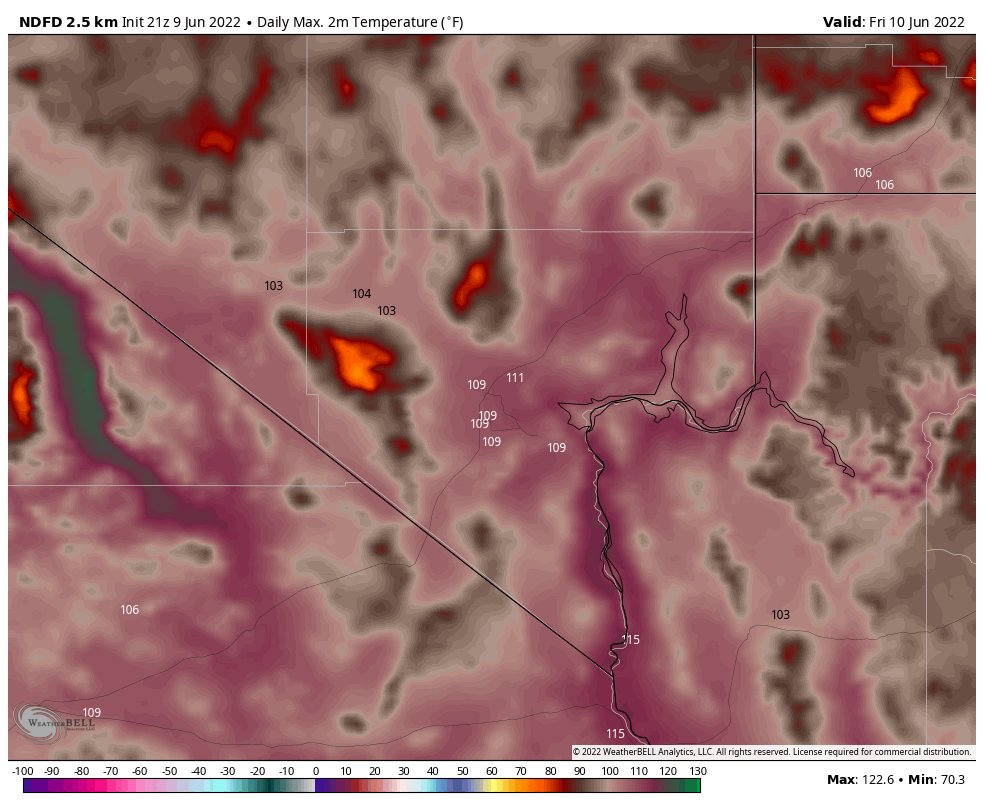 The Phoenix area as is typical will experience the most extreme hit of any city in the Southwest. The city is forecast to top near 110° for four straight days from Thursday to Sunday peaking at 114° on Sunday. Millions across the state are under an Excessive Heat Warning including the entire Phoenix metro area as well as Tucson. But in fact, the most dangerous part of the heatwave for the region won't be the blistering daytime highs, but the sweltering overnight lows.

For tens of millions of people across the Southwest dangerous overnight lows will dramatically increase the risk of heat illnesses.

In the Central Valley of California, lows will only dip into the 65-75° range while Phoenix and Vegas will only dip down into the mid to upper 80s. Such hot overnight lows do not allow the body to adequately recover from the dangerous daytime heat and heat stress can continue to build overnight. This is especially dangerous for the elderly, infants, the poor, and those without AC. The National Weather Service is forecasting more overnight lows to be broken than record highs across the Southwest during this heatwave which is consistent with multiple studies that climate change is causing nights to warm faster than days. 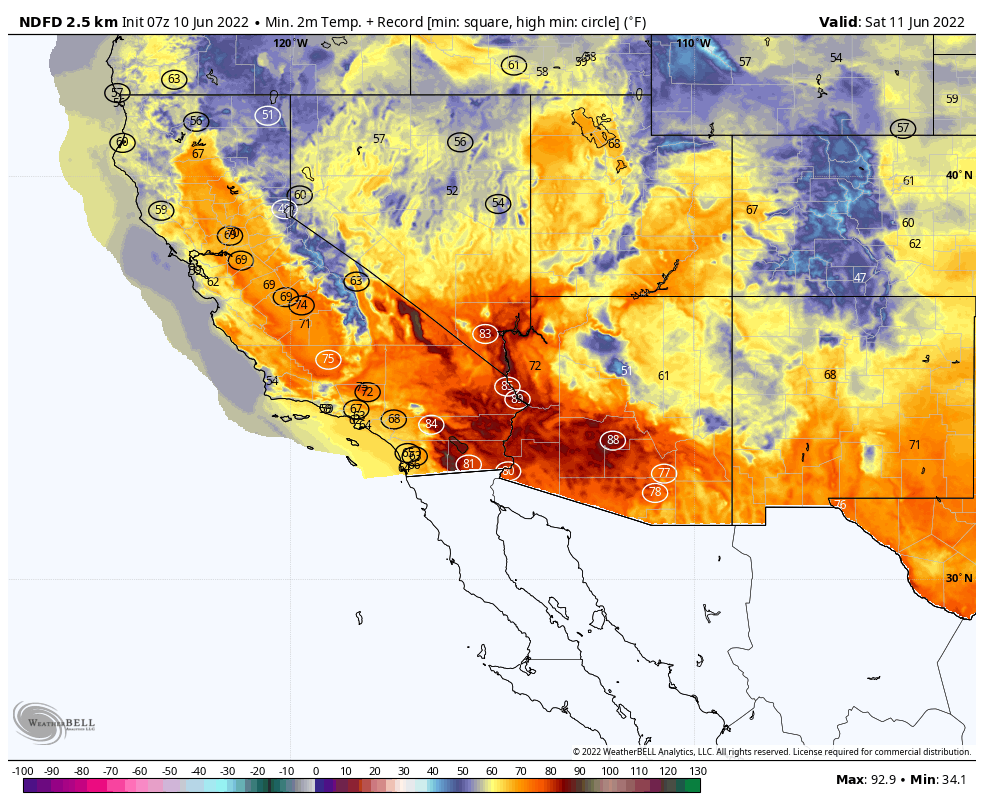 The extremely hot temperature and very low relative humidity will also elevate wildfire danger and further dry out the drought-stressed vegetation across the Southwest already reeling from the ongoing megadrought. Vegetation has already dried out much faster than usual and this ongoing heatwave will only further exacerbate the increasing flammability and dryness of vegetation.

Climate change has already made heatwaves more common and intense than in past decades, with heatwaves such as the one currently affecting the Southwest expected to become more frequent and intense in the future.