Chasing Storms in the... Desert!?

Just like the weather, a storm chaser never rests. To keep the body healthy and operating at peak efficiency, the most important thing is good hydration. Anywhere you find life on earth, water is required. Even in the desert in the southwest of the United States, rain is needed to keep the abundance of life found there sustained, and ideally, thriving. This is where the North American monsoon season comes into play. Each year from June to September, a pattern of increased moisture and accompanying thundershowers brings these needed rains to the Southwest.

Some seasons are stronger than other years. For example, 2020 and 2021 were not particularly strong monsoon seasons. My last storm chase to the Southwest was in 2019. Monsoon season 2022 has been different, with one of the best monsoon seasons in the past 10 years.

In a strong monsoon season a daily pattern repeats itself where daytime heating builds, increasing instability. As the monsoon winds move over the mountains found within the region, thunderstorms begin to build as the mountains force the moisture-laden air upwards into cooler temperatures and drier air; this is called orographic lift. Thunderstorms form, rain falls and lightning strikes. Usually these thunderstorms then dissipate as the sun sets and the instability goes down.

This can happen every day for weeks during the monsoon season. 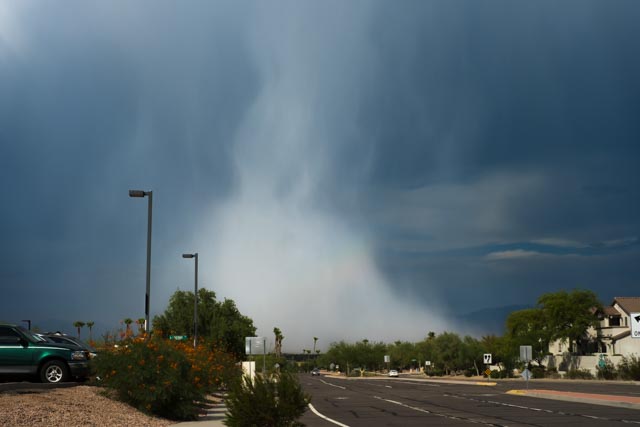 A rain/hail shaft dumps to the ground out of a thunderstorm over Scottsdale, AZ - August 2022

These thunderstorms in the desert can sometimes be severe.

These storms can bring damaging winds, haboobs (dust storms), dangerous lightning, and flash flooding. When heaps of rain dump onto the dry, hard, parched land of the desert, flash flooding can occur. Normally dry washes (low lying river channels) fill with these rains as they rush across the landscape, slowly being absorbed into the landscape. Sometimes these waters find their way into dry lake beds, or playas.

While the flooding rains can be disruptive, or even dangerous for humans, desert flora and fauna rejoice. Some creatures can wait years, or even decades, for the rain to return and keep their cycle of life moving forward.

On my recent storm chase to the Southwest, I came across a normally dry lake bed south of Las Vegas, Nevada, in eastern California. Ivanpah Lake is a dry lake bed in the Mojave Desert. While normally dry, occasionally this playa becomes a harbinger of life as monsoon rains wash into and collect in the low lying basin that is bordered by tall mountains. Creatures such as the Tadpole shrimp patiently waiting for life-giving water now hatch by the millions. Birds arrive and feast on the bounty. I witnessed this firsthand chasing the monsoon this season. While I missed the flood that filled the playa and shut down Interstate 15 (which runs right through the middle of the playa), I did get to see the aftermath the next day, flying my drone over this newly filled oasis. Tadpole shrimp from the normally dry Ivanpah Lake in the Mojave Desert - photo taken by @ken_trimble1 on Twitter.

Monsoon chasing offers a more relaxed and casual chasing experience. It allows me to focus on capturing beauty, shooting time-lapses of the rains, sometimes falling as wet microbursts. Wet microbursts are an area of sinking air associated with thunderstorms, that are filled with a large amount of precipitation. What a surreal experience looking at Desert Iguana's feasting on White-lined sphinx moth caterpillars, while listening to the rumbles of thunder over the desert mountains.

Flash flooding can be dangerous for humans as the washes can eventually cross roadways. The storm that produced the flash flooding could be many miles away, and catch people off-guard that aren't paying attention.

Flash floods carry dangerous debris such as rocks and tree trunks. Flash floods can wash out roads, which is why "turn around, don't drown" is such an important National Weather Service campaign designed to save lives.

My particular storm chase in the desert this monsoon season took me from Phoenix, Arizona northwest to Lake Mead, and then down into the Mojave Desert. Lake Mead has been dropping its water levels for years due to a historic drought.

A strong monsoon season is exactly what is needed right now to help slow down the loss of water.

The monsoon season was a delight to chase and is happening during a time I usually find myself deep inside of the eye of hurricane's. But the Atlantic hurricane season has been surprisingly very quiet thus far. I don't mind though, I'd love to head back to the Desert Southwest for one more monsoon chase! If you find yourself in the desert, make sure you pack plenty of water!